Whatever it takes to Live Life

Well guys, it's been quite a while. We really dropped the ball on this whole blog thing in the past month, but it's probably better you don't know everything that happened in Bolivia. Anyways, our travels in Bolivia started in a little place called Salar de Uyuni aka Mars/North Pole/Whoville/Salvador Dali's famous clock painting. We took a three day tour through the Salar and this place was absolutely ridiculous. Rather than explaining the absurdity, we think its better you see for yourself. You know what they say, a picture's worth a thousand words, right?
Stop 1: train cemetery .. This was just weird. Why were there a bunch of 60 year old abandoned trains here? We can't tell you because we lucked out with a guide who didn't explain anything 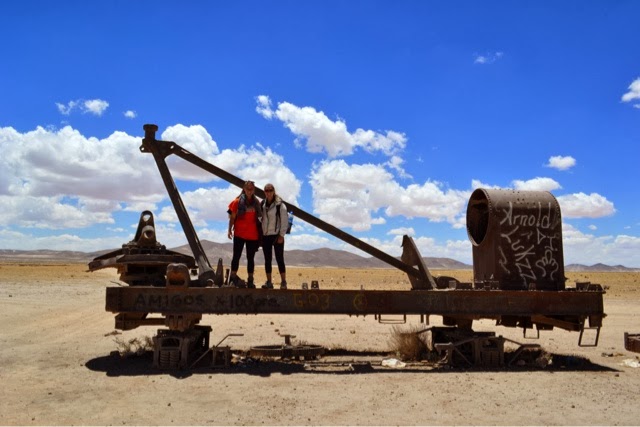 Stop 2: The Salar.. We actually think we teleported to another planet. All you could see for miles was salt. Crazy. 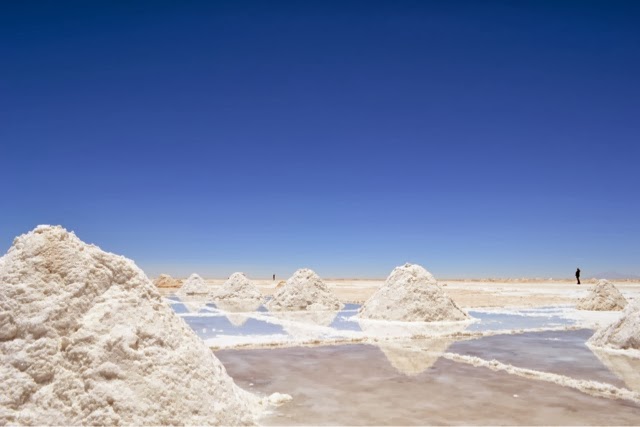 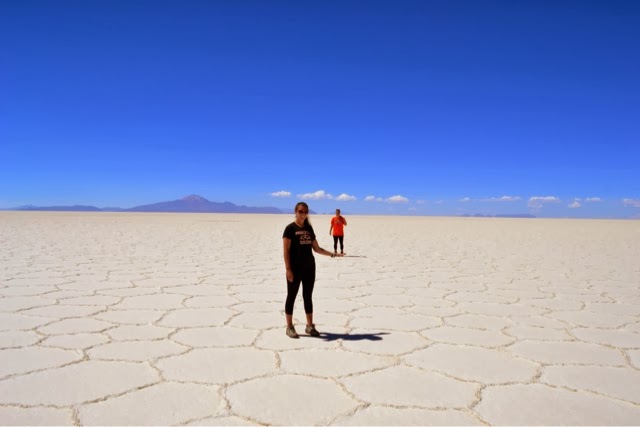 Stop 3: Fish Island. Really a misleading name because there weren't fish. Or water for that matter. Instead there were cacti, rocks, and salt.. 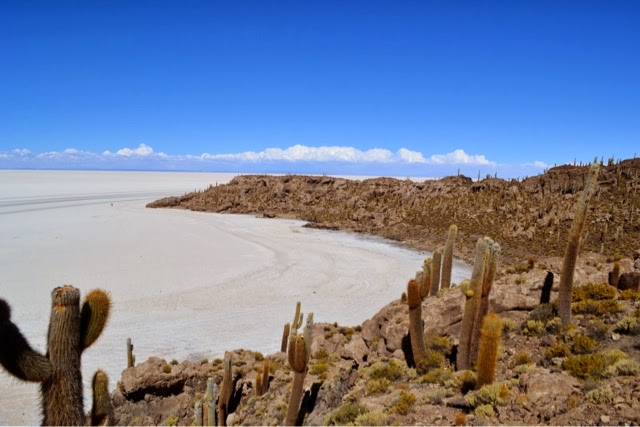 Stop 4: Orguelle Volcano. This was when we landed on Mars 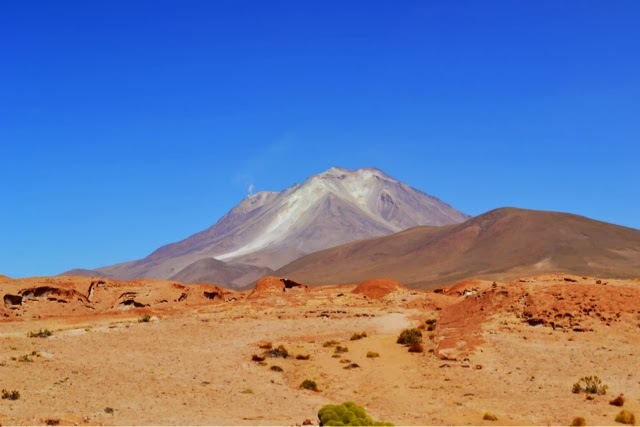 Stop 5: Lagunas on Lagunas on lagunas. There were also lots of flamingos which was really confusing 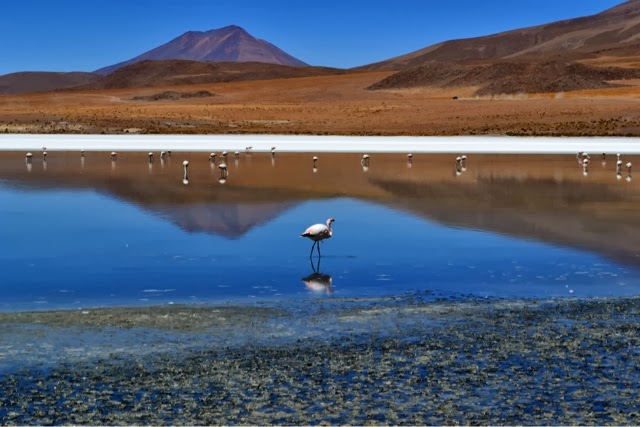 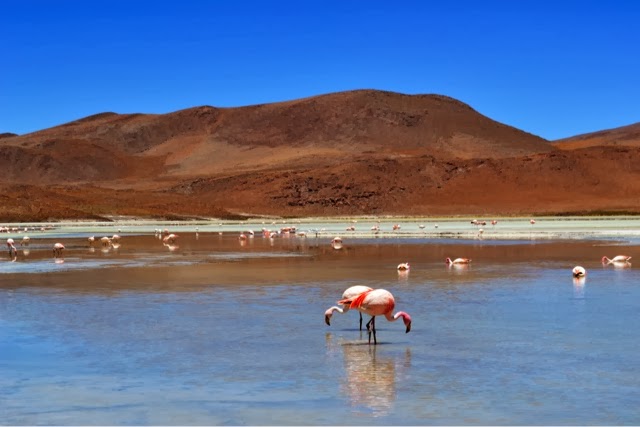 Stop 6: The Soleli Desert. You would think this place would be very hot seeing as its a desert. Totally wrong. It was freezing and windy 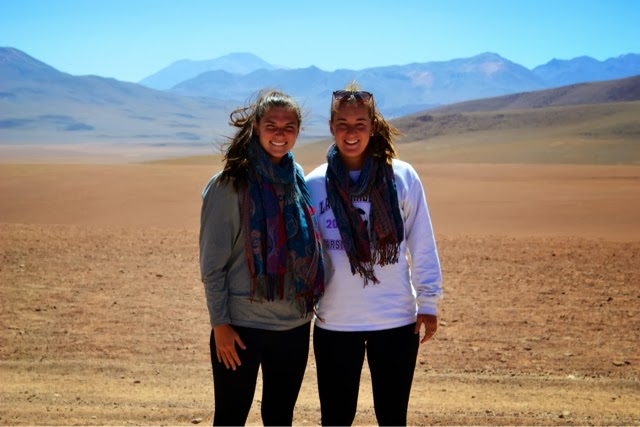 Stop 7: Arbol de Piedra. For us Americans: Rock Tree. Litcherally a rock that looks like a tree 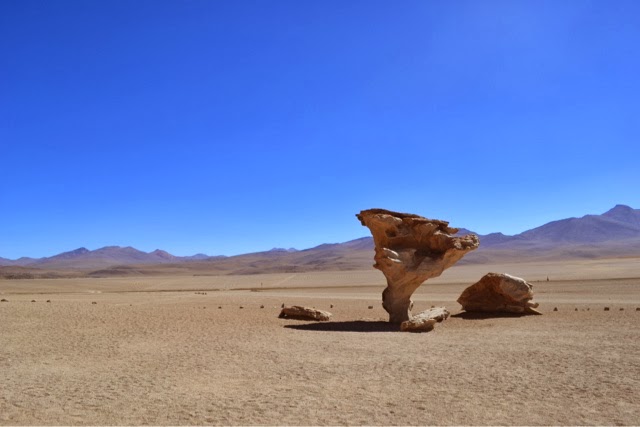 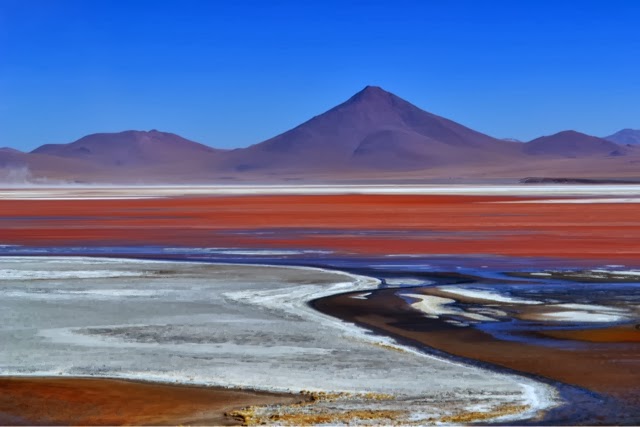 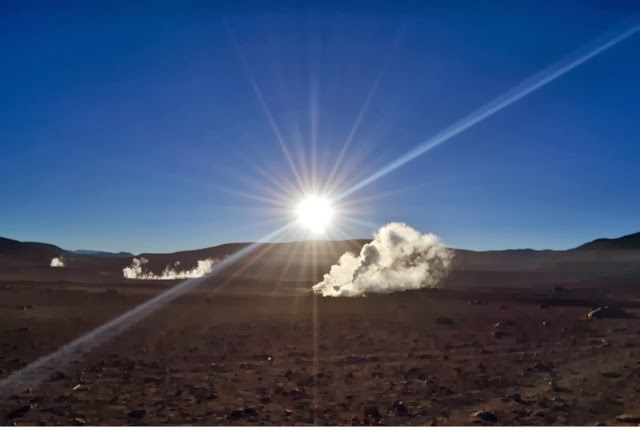 Stop 10: Hotsprings with our friend who happens to be Kelsey Byrne 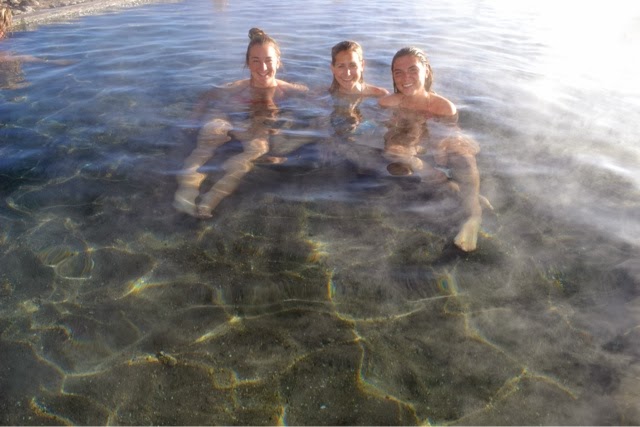 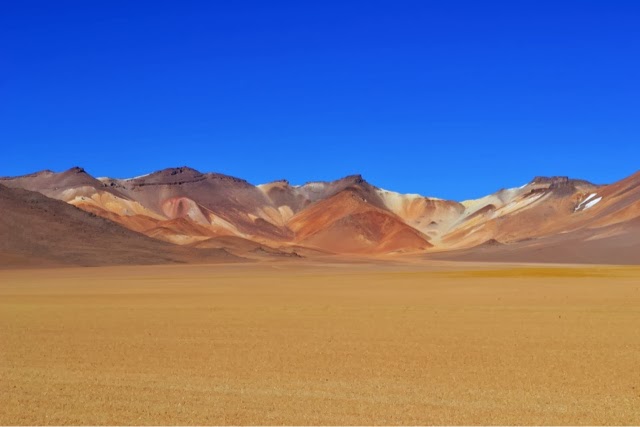 Stop 12: Laguna verde... Unfortunately the Laguna wasn't very green. In fact not green at all 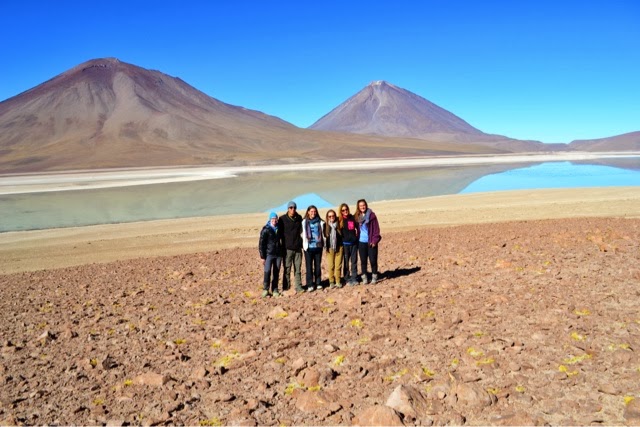 Stop 13: Chile. So turns out the Soleli desert connects to Chile and most people logically choose to get to Chile this way. Did we cross the border? Yes. Are we planning to travel through Chile? Yes. Then why would we turn around and head north through Bolivia and double back to Peru? We have absolutely no clue. We are now realizing our travel plans may not make the most sense. But hey, live and learn, right? 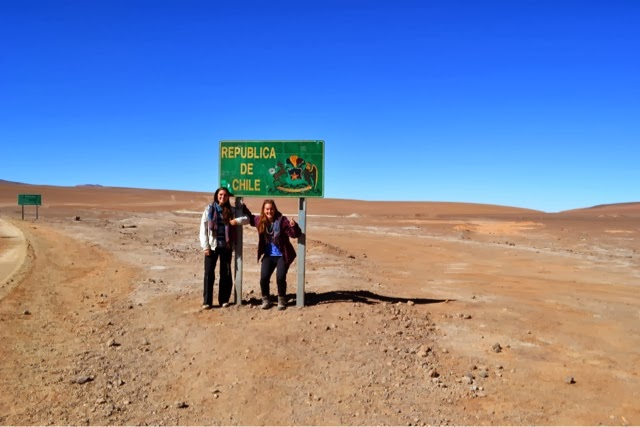 Stop 14: Rock Valley. It's in the name, a valley of lava rocks 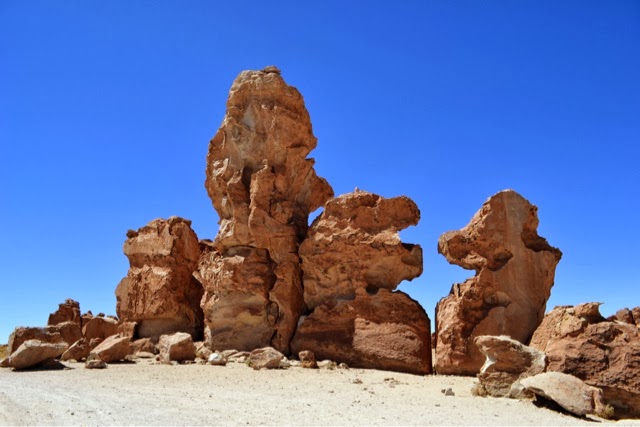 Andddd that ends our trip to Uyuni. If you find yourself in Southern Bolivia, we highly recommend a pitstop. This brings us to Sucre where there were some very high highs, and arguably the lowest of lows. Lets start with the highs. We went horseback riding for the first time and it was awesome. Another high, we saw the worlds largest cite of dinosaur footprints. Who doesn't love dinosaurs? 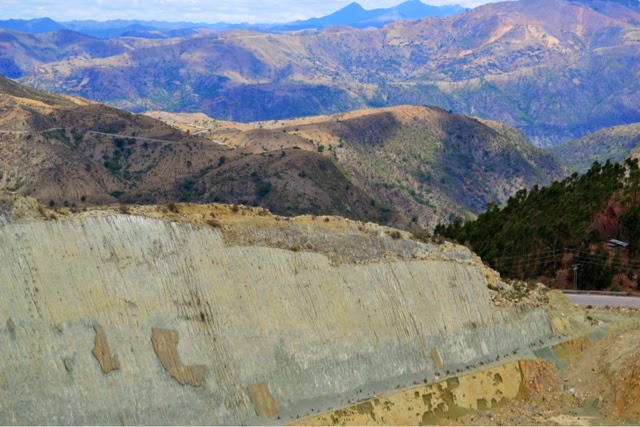 Now the lows. Thanksgiving. Apparently Bolivians really don't like Americans, so when we went around asking for the typical American Thanksgiving dinner, we were either ignored or completely shot down. To deal with the rejection, we decided to down a bottle of wine and eat dinner at a lovely fast food establishment called Pollo Loco. Now if you thought Thanksgiving was rock bottom, no no. Claire hit the earth's core. We signed up to run a night 9k that passed 9 beautiful churches which were decorated with Christmas lights. Tied up our shoes, pinned on our numbers, as former college athletes we thought, "this will be great, we might place in this thing!" 8 minutes later Claire is in the fetal position on the side of the road. We thought it was bad when runners were stopping to offer water, but it hit a whole new low when Claire was surrounded by police officers and an EMT asking if she needed medical attention. After assuring everyone that medical attention wasn't necessary, we walked home, Claire in such shame we decided it was time to leave Sucre. From Sucre, we spent less than an hour in Santa Cruz, met a motley drinking crew consisting of a fully tattood 26 year old Canadian, Hagrid, a 70 year old retired oil tycoon, two belgian dentists, an american firefighter and his bolivian girlfriend, in Samaipata, found ourselves at an Evangelival Jesus camp in Cochabamba, and then finally made it back to La Paz. Since we usually have such great luck, we decided to test it by biking down the world's most dangerous road. Let us tell you .. It's called the worlds most dangerous road for a reason. It was treacherous. We started at the top of a 4,700 meter mountain, and descended all the way into the amazon basin miraculously in one piece. The tours advertise that anyone can do it, but seeing as over half of the people in our group fell hard, and 23 people have died in the past 17 years, we seriously doubt that. As a victim of one of the falls, I (Nabs), can honestly say the fall hurt like shit, and I (Claire), as a first hand witness can say I thought Alison was going to die. All in all though, we made it out alive and to a buffet lunch so that's what's most important. 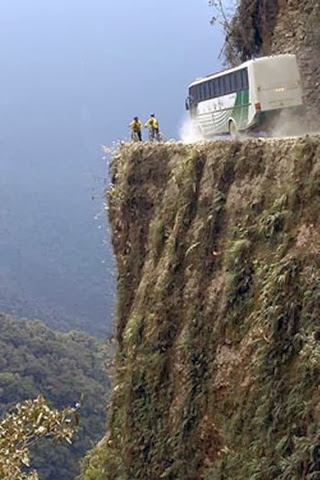 We look pretty badass don't ya think? Nah that's not us. We actually don't have any photos because we were told we would receive a DVD with pictures of us, but every single photo on the DVD was awful. But yeah, they actually let you bike around that curve, and we did.. Along with many more ridiculously dangerous stretches of the road.
Having survived the death road, we decided our time in Bolivia had run its course and we headed to Arequipa, Peru. Yes, we did go from Peru to Boliva and back to Peru. Geography isn't our strong suit. First thing we did upon arriving to Arequipa is go on a three day trek through the second deepest canyon in the world, Colca Canyon, which is double the size of the Grand Canyon. Though it was beautiful and we got some much needed exercise, we were confused the whole time because it just looked like a valley of mountains. The Grand Canyon is so much cooler. Not shocking because America is the greatest place on earth (can't you see how cultured we have become?). So that was Colca. 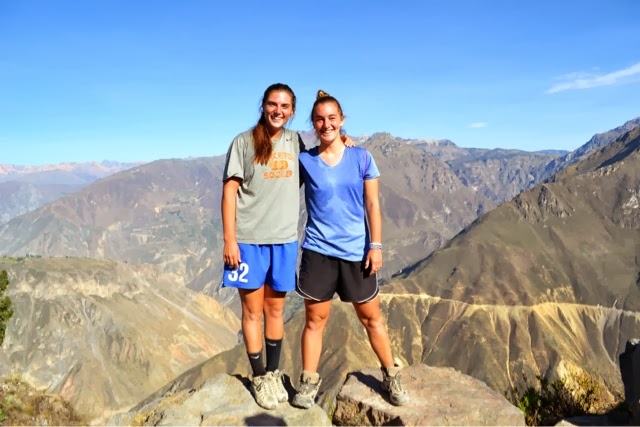 Sweat? Whatever we climbed 1,200 meters at 430 am in 2.5 hours. But yes, we do understand this plays into why we don't have boyfriends.
We got back from our Colca hike just in time to celebrate Christmas Eve with all our friends and family. By that we mean eachother and a lovely middle aged, overweight, Peruvian man named Miguel. We arenas sure how we became BFFs with Miguel, but we don't hate it. We ate a bomb ass meal at his house and then watched the whole city set off fireworks at midnight. Side note, this is probably the most dangerous tradition we've encountered so far. People get hammered and throw fireworks at eachother. After dodging death by fireworks, we set out cookies, hummed jingle bells, and dreamed beautiful dreams of Santa Claus. And man, Santa must have loved that because we woke up with the best presents ever under our mini Christmas tree!! 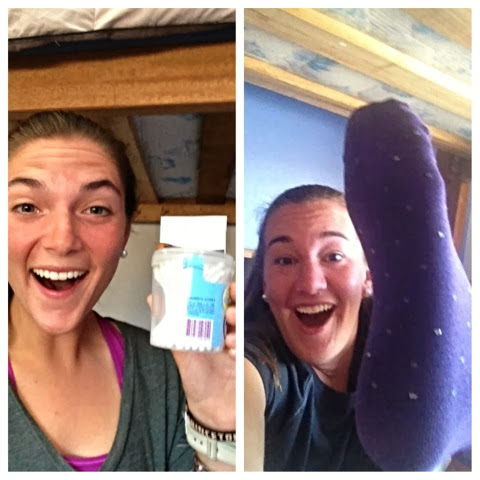 Yep, you guessed it!!! QTIPS AND SOCKS!!!! Every girls dream
This brings us to This Is the End. Thanks to Bolivia we have had quite a few moments where we think "well, yeah, this is the end for us"
This Is The End:
14. Driving through the Uyuni Salt Flat and Soleli Desert for three days with a completely cracked windshield that our driver often held together with his hand that in turn was not on the wheel
15. Claire in the fetal position surrounded by police and EMTs after a difficult 8 minutes of running
16. The bus ride from hell. Winding through the Andes mountains in the middle of the night, hearing parts of the bus fall off, sitting next to a Chilean Hippi lunatic, in 100 degree weather. It wasn't pleasant.
17. Waving goodbye to the only person we knew on the way to Evangelical Jesus camp in the middle of the woods in Cochabamba, Bolivia. Just wrap your mind around that.
18. Nabs flying over her handlebars, doing a flip in the air, and landing on her head on the edge of the World's Most Dangerous Road. That hurt
19. Nabs being bit on the side by a 170lb bull mastiff because lunatics were throwing fireworks at us. "I not afraid of dogs. I repeat, I am not afraid of dogs" Nabs.
Note from Nabs: it's been a rough couple weeks, guys. Don't worry though, what doesn't kill      you makes you stronger I always say.
20. Coming back from dinner to find the teenage hostel worker in our room with the door closed "fixing the shower." Weird. Weirder was when we came across a butcher knife on the opposite side of the room. Don't worry though, we fashioned a strategic defense mechanism/fortress. Flawless reaction.
Oh yeah, we forgot to mention this kid showed up! It's great to have her and all, but what's really important here is that she has tried Sublimes, and is now a firm believer in the divinity of the product. We couldn't make this stuff up. Please note the tears of joy 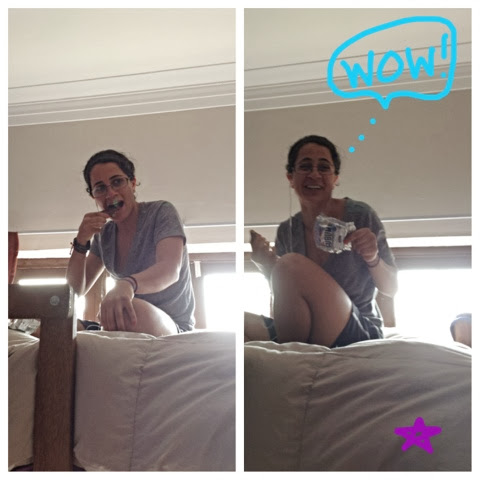 Also, somehow this little dog/hedgehog/bear came into our presence. No, of course we didn't willingly seek it out. What type of unemployed traveling idiots would go out and get a dog in Peru?? That's just ridiculous and totally irresponsible. 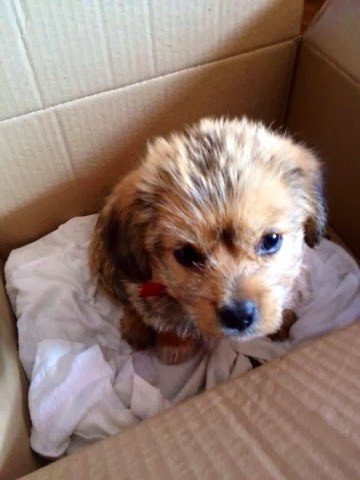 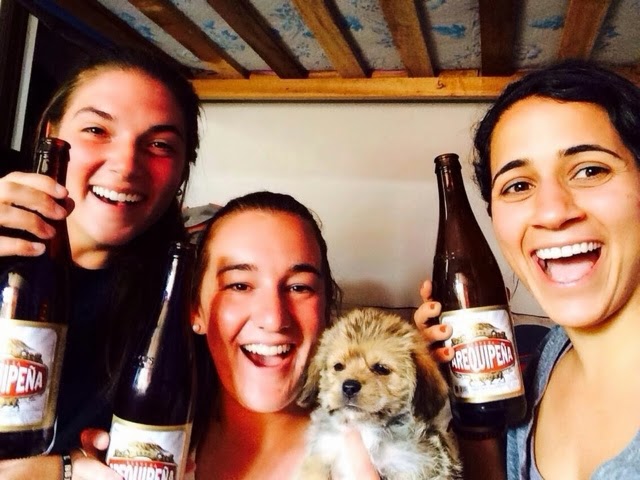